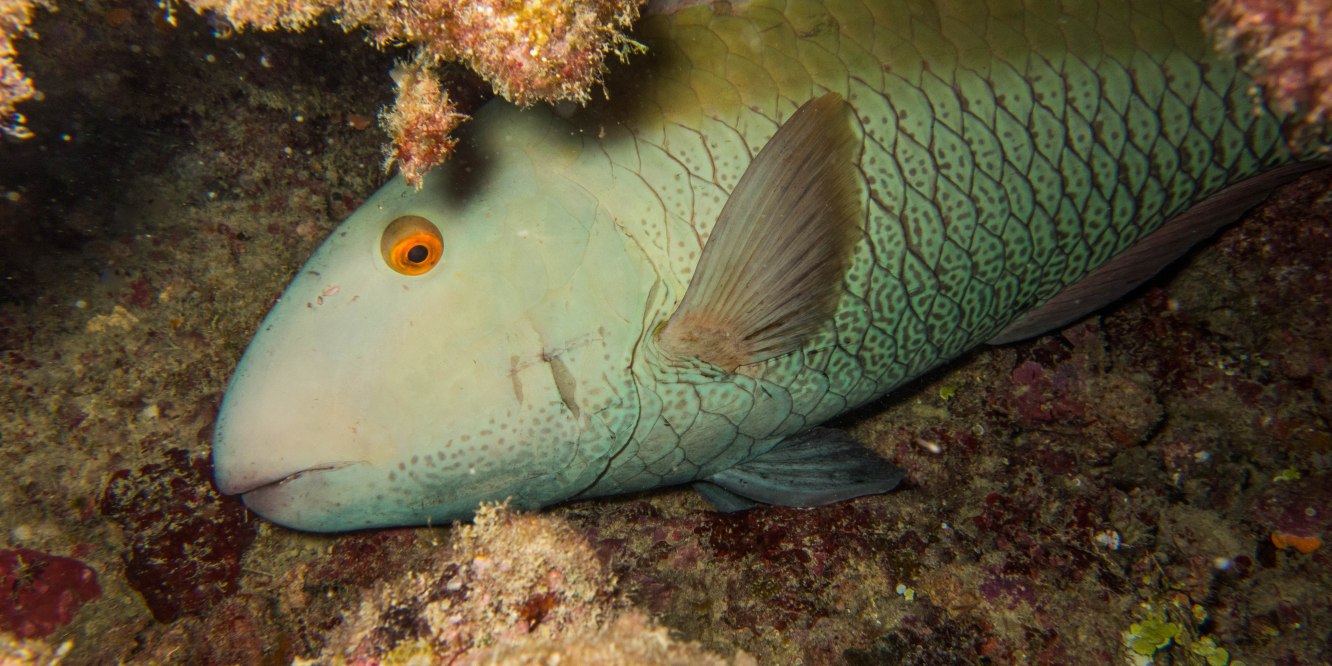 Have you ever watched fish swimming around in an aquarium and wondered if they needed sleep? Surely, they have to rest sometimes, right? Well, yes, they do, but it’s not always so cut-and-dry. Sleep, as defined by us humans, differs from sleep in other animals. When we sleep, we close our eyes, and electrical activity in our neocortex changes. Fish, on the other hand, have neither eyelids nor a neocortex, so they do not sleep according to our terms. Rather, they rest, or they enter periods of suspended animation.

According to biologist Stéphan G. Reebs, sleep (as we know it) is defined by four behavioral criteria:

So, with those four criteria in mind, we can conclude that fish do “sleep”. To understand how, we need to examine different fish species in different environments.

One of the most well-known “sleeping fish” is the parrotfish, and scuba divers on coral reefs will generally encounter one or two on a night dive. When darkness shrouds the reef, these colorful little fish will find a secluded spot beneath the coral or inside a crevice. There, using special mucus-producing glands behind their gills, they encase themselves in a bubble-like mucus cocoon.

Not all parrotfish produce these cocoons, but for the ones that do, scientists speculate the cocoons might aid in deterring parasites and predators. Like an organic mosquito net, this cocoon keeps parasites at bay, and it may also act as an early warning system when predators, such as moray eels, come knocking. However, while the parasite theory is well-supported, there is limited evidence supporting the predator theory.

But parrotfish are not the only sleeping fish by any means. Many other fish species “sleep”, and their sleep patterns are influenced by their body type, their diet, their behavior, and their habitat. To conserve energy and avoid predators, sleep is essential for reef fish, whether they are diurnal and become inactive during the night like the blue-spotted rock-cod…

…or nocturnal and become inactive during the day like the lunar-tailed bigeye.

Yet, these periods of inactivity can be interrupted. Spawning season causes many species to become active during both the day and the night, as does caring for eggs/young until they can fend for themselves. But not all interruptions are natural.

In some places, nocturnal fish like the lunar-tailed bigeye have been shifting to a decidedly diurnal lifestyle. In this study conducted at the Palmyra and Tabuaeran Atolls in the central Pacific, researchers discovered that, in absence of diurnal predators due to overfishing, nocturnal fish were becoming more active during the day. As a result, the normally diurnal fish now had to compete with the normally nocturnal fish for resources.

Now, reef fish are small and have plenty of places to hide during the day and night. But what about the larger pelagic (ocean-going) fish like great white sharks, tuna, and marlin? Some of these fish, like great whites, NEED to keep moving in order to breath due to ram-ventilation.

The answer? Pelagic fish don’t sleep at all. The functions of sleep are still not yet fully understood, but if sleep serves to form memories, pelagic fish would have no problem recording them without sleep. Why? The open ocean is such a vast, empty, and boring place that pelagic fish do not need to shut down their sensory input to form memories.

That said, this does not necessarily apply to sharks. According to ReefQuest Centre for Shark Research, sharks’ swimming movements are controlled through the spinal cord and not the brain. Thus, they can shut down parts of their brain and swim while unconscious. They can literally function on autopilot.

In schooling pelagic fish, the dynamics are different. Together, schooling fish are scarcely bored in the big blue ocean, and someone’s probably asking, “Are we there yet?” every five minutes. So, under those circumstances, how do they sleep? Well, schooling behavior, often cited as a defense mechanism against predators, has even more complex functions.

During the day, pelagic fish like bigeye trevally school together, remaining mostly stationary and inactive, but at night, they break apart to feed. Hammerhead sharks also do this, gathering in schools that number in the hundreds during the day and dispersing at night to feed near the bottom/in deeper water. But big predators like hammerheads don’t have the same enemies as trevallies, so why the need for a school?

According to biologist J. Lee Kavanau, schooling serves another purpose: it allows fish to dull their senses enough to “sleep”. Schooling fish do not require the same amount of alertness as solitary ones. Most of the fish in the school only need to maintain their position, since they are shielded from open water on all sides. This shifts the burden of sensory processing from one fish to the entire school. In this manner, the schooling fish are able to remain inactive and “sleep” without stopping.

So that’s the basic gist behind fish sleep habits. Most fish sleep, just not under traditional, human terms. They might seek shelter during the day/night and become inactive; they might shut off their brain and go into autopilot mode; or they might dull their senses within the safety of a school. How they sleep depends entirely on their species, body type, diet, behavior, and habitat, if they even sleep at all.

While I was researching this topic, I happened upon The Fisheries Blog, which provided an insightful article on the subject. I recommend you check it out here. And, for more information, this Wikipedia article is also fantastic, but then again, Wikipedia in general is fantastic. Thanks for reading, and have a great day!