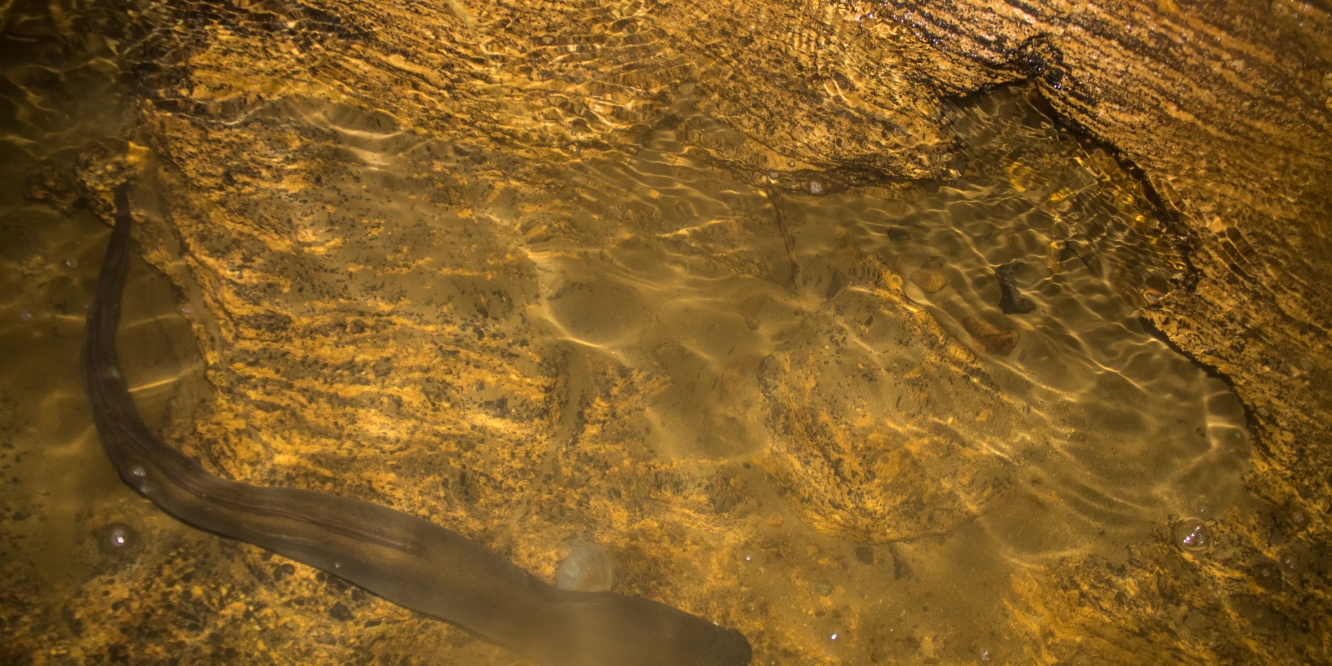 Back in March 2014, I embarked on my scariest adventure yet. On my way home from Australia, I flew into New Zealand for a few days, but I didn’t do anything too crazy. That is, until I decided to go on a side quest into a creepy, flooded cave filled with eels and glowworms.

Now, you’re probably wondering how I got myself into this mess. Well, I took a bus from Auckland to a town 3 hours north called Whangarei. Whangarei is Maori, so it’s not spelled or pronounced the way you’d expect. It’s not WAN-GAR-RAY; it’s FAN-NA-RAY.

Anyways, I went to Whangarei to go scuba diving in the famed Poor Knights Islands, but I also intended to visit the picturesque Whangarei Falls. My hostel was an easy hike from the falls, but being an opportunist, I wanted to know more about the area.

I’d heard there were glowworm caves nearby, so I asked the hostel receptionist about them. She told me about a group of glowworm caves called Abbey Caves that was a little ways past Whangarei Falls. She handed me a brochure with a map, and I headed off into the wilderness.

Now, mind you, I’m not a “cave guy”. There are a bunch of YouTubers out there who make nothing but caving videos, but that’s not my usual territory. One, I REALLY don’t like being in confined spaces, and two, I’ve seen enough horror movies to know that nothing good happens in caves.

However, early 20s Teddy was a reckless maniac, so at that time, my sense of self-preservation was severely stunted. The allure of seeing glowworms lighting up the cave ceiling like stars was far too great. I mean, you literally can’t see these fantastical creatures in any other part of the world. So, naturally, I just HAD to go see them.

The hike from my hostel to Whangarei Falls only took 5 minutes, but the caves were a little farther. They were about 7 kilometers away, which is roughly 4 miles. But I’d been hiking a lot in Australia, so 4 miles was nothing for me back then.

After getting some pictures of the falls, I followed the river down to a road, and a curious little bird followed me. Somehow, I always manage to befriend woodland creatures.

Eventually, I reached a road, and I followed that road to the caves. There were three caves, so I had to pick one. I picked one called Organ Cave.

Standing at the entrance of the cave, I could hear water rushing and a cold breeze wailing from within. It sounded like breathing. A chill went down my spine.

For a minute, I stood there, frightened to step forward, and contemplated turning back. ‘This is how found footage movies start,’ I thought. But, then, I took a deep breath and said to myself, “I’m going in this freakin cave!!!” and climbed inside.

Immediately, I splashed into cold, clear water that went up to my ankles. There was no turning back now.

Being alone in the dark was very unsettling. Outside at night, you have ambient light, even without the moon, but in a cave, you have no light whatsoever. So, without a flashlight, you’re screwed.

Luckily, I had a flashlight, and my camcorder had a infrared light that allowed me to film in total darkness. This is some of the infrared footage I collected (see YouTube video). And this is what it sounded like when I walked through the cave (also see YouTube video).

In the water, there were eels. They emerged from the abyss and rubbed against my ankles. That might freak some people out, but for me, it was actually rather comforting.

I needed this comfort because, as I progressed deeper into the cave, the water also became deeper. Before I knew it, I was waist deep in the water.

This wasn’t good. I had the camcorder in my hand, and two cameras around my neck. One wrong move, and all my electronics would drown in the dark water. Even so, I risked it all and pushed forward. The real prize was at the end of the cave.

Here, I found hundreds, if not thousands of glowworms. I turned off my lights, and they lit up the cave like a haunted city in the Underworld. Sounds freaky, right? Well, the glowworms had become my light in the darkness. To me, they were like stars in a night sky.

In that moment, all of my fear evaporated. I’d done it. I’d conquered one of my biggest fears to see something truly beautiful, and nothing bad happened! Now, I just had to get back out of the cave.

Thankfully, adrenaline was on my side, and I moved a lot quicker out of the cave. When I finally emerged from the darkness, I felt like a new man.

Full disclaimer: DO NOT go into a cave alone like I did. I’m not an experienced caver; I didn’t have a helmet or any other caving equipment; and no one knew I was there. Getting in and out of that cave safely was miraculous. Back then, I was agnostic and gave myself all the credit, but now, I thank God for guiding me safely through the unknown.

Sometimes, you need to challenge yourself, and this was a clear example of that. Maybe it’s time for you to take a deep breath and enter that flooded cave. Whether you’re thinking about trying that new restaurant down the street or buying a one-way ticket to the other side of the world, go forth, and find your light in the darkness.